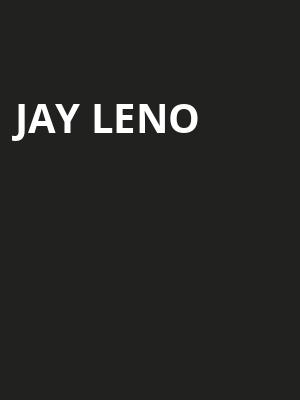 The outspoken talkshow host hits town for another late night evening of chat, comedy and entertainment.

JAY IS COMING BACK TO TOWN!

Love him or hate him, the hugely controversial Leno followed in the footsteps of legendary NBC late-night hosts Steve Allen, Jack Paar and Johnny Carson as the host of the Emmy Award-winning and top-rated "The Tonight Show," until his last show in 2014. You would think that he would be eager for some downtime - instead, he continues to hone his roasting and satirical skills at engagements across the country, often exceeding 300 dates per year!

Leno is renowned for his incredibly funny monologues, celebrity interviews, and of course his wry look at news headlines that never should have made it into print. He's not afraid to talk about current affairs or to satirize public figures, but does it with a twinkle in his eyes that never comes off as mean-spirited. A keen observer of modern phenomena, he manages to keep his material fresh and up to date, whether he is talking about binge watching television shows or lambasting his futility with technological advances.

During his tenure on the Tonight Show, he successfully walked a fine line between attracting his more mature and conservative audience with introducing edgier acts, modern pop culture into his shows, in order to appeal to younger fans - to a hugely varying opinion amongst his peers. Thankfully, it's the people that matter to him, and his enduring popularity hasbt waned since he first burst onto the comedy scene in the 1970s.

You may be required to have had a COVID vaccine in order to attend this performance or show proof of a negative test. Please contact the venue directly for more information on this.

About Lowell Theater: We are an independent show guide not a venue or show. We sell primary, discount and resale tickets and prices may be above or below face value.

View all times and dates

The best comedy show I have ever seen. Jay covered a lot of current events... more

Read all reviews Write a review

Sound good to you? Share this page on social media and let your friends know about Jay Leno at Lowell Memorial Auditorium.

Keep up to date

I want email news and updates for events in my area! Read how we protect your data.

You know the drill, websites need cookies to make them work. Details of how we do it here. Hello! It's probably obvious, but we need to let you know that we use cookies to enable us to run this website and for it to actually work! You can find lots more detail in our Cookie Policy.
Got it!